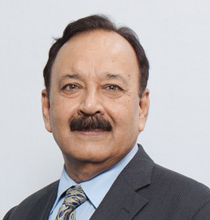 V. Subramanian joined the Indian Administrative Service in 1971 (West Bengal Cadre). He occupied many senior positions in the Government of India and the Government of West Bengal during a career of 37 years. In the State, he headed the departments of Power and Labour. Most recently Mr. Subramanian was the Secretary to the Government of India with the Ministry of New and Renewable Energy (MNRE) where he pioneered important initiatives for reforms and development of the renewable energy sector, including the introduction of the "Feed-in Tariff" concept. As Additional Secretary & Financial Adviser, Ministries of Civil Aviation, Tourism and Culture, he was on the boards of Air India, Indian Airlines, Airports Authority of India, Helicopter Corporation of India and India Tourism Development Corporation. He was also the Member - Secretary of the High Level Committee that recommended reforms and a Roadmap for Civil Aviation in India. Later, as Financial Adviser, Ministry of Rural Development, he implemented National Rural Development plans including the National Rural Employment Guarantee Scheme. Presently, he is a freelance consultant. He was also the Business Development Adviser to the Council for Industrial and Scientific Research at New Delhi for a year after his retirement. He was also the Chairman of the Research Council of the Indian Institute of Petroleum in an honorary capacity for three years. He headed the Indian Wind Energy Association as Secretary General and later as Chairman from 2008 to 2018. Presently, he is also on the Advisory Board of India Energy Exchange.